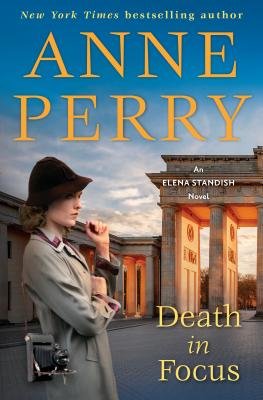 The man had been dead a long time and he smelled bad, the malodorous stink of his decomposing flesh tainting the hot, still air that was already fetid with the dry stench of stale wood-smoke. He was folded double, over the top strand of a wire fence that enclosed the yard of what had once been a small farmstead. Now it was merely a single-story adobe house with the blackened ruin of a barn on one side; a corral littered with slaughtered livestock on the other and a burnt-out wagon in front of it.

Edge had been smelling the woodsmoke for, a few miles, knowing it meant trouble. The big black stallion he rode was also familiar with the scent, its equine awareness causing it to falter from the steady pace which had been maintained ever since the border was crossed at noon. But Edge stroked the smoothness of his mount's neck and muttered gentle words of encouragement as he urged the animal forward again, toward the north.

Edge had stolen the horse many months before, from a Mexican Army captain who should not have shot the American's own horse. The single-action .44 Colt in a holster tied down to Edge's right thigh had also been stolen from the Mexican officer, as had the ornate non-regulation saddle and the seven-shot Spencer repeating rifle slung in the boot behind. The knife tucked into a sheath at the back of his gunbelt was Edge's own: so was the razor which sat snugly in a pouch hanging at the back of his neck beneath the black shirt. The Mexican had not complained as he watched Edge rob him, for his jugular vein had been opened by the American's razor and he had only enough strength remaining to ask for a priest. To Edge's mind, the trouble he had taken to get the man his priest was adequate barter for the horse and weapons.

It was a good horse; strong, willing and intelligent and it had learned to trust its new owner so that even when the ruined farmstead came into sight and the smell of violent death mingled with the after-scent of fire, the animal continued to advance, a low-keyed whinny supplying the only clue to its nervousness. Edge halted his mount a few feet from the dead man and dismounted, his right hand hovering above the wooden butt of the Colt. He led the horse to one of the uprights supporting the wire fence and looped the reins around the post, never taking his eyes away from the farmhouse. The Spencer slid smoothly from its boot and he worked a shell from the stock-housed magazine into the breech.

Over at the house nothing moved and in the area of the dead man there was just the constant stirring of the hungry flies. They buzzed away angrily at the intrusion of Edge, who relaxed his vigilance of the house to examine the body with dispassionate interest. The man had been scalped, cleanly and expertly, the crown of his head laid open in an almost perfect circle to allow a large tuft of his black hair to be claimed as a trophy. But he had been lucky, for he had died first Edge, wrinkling his flared nostrils; his narrowed eyes showing for a fleeting moment his distaste for the long-dead body, used the barrel of the rifle to flip the man off the fence. The man went over backwards and did not unbend from the attitude of death which the passing hours had forced it to adopt for eternity. Looking across the fence, Edge could see the barbed arrow embedded into the man's chest, left of center.

Edge walked back along the outside of the fence and unhitched his horse, then led the animal toward and through the open gateway into the yard of the farmstead. “I should have taken notice of you, feller,” he murmured softly. “Mexican trouble we know about and can handle. It's been a long time since I had a run-in with any Apaches.”

The horse heard only a reassuring, soft-spoken voice and allowed the man to lead it forward and hobble it to the iron rim of one of the wheels on the charred wagon. As Edge crossed the final few feet to the house he saw that the layer of dust on the sun-hardened ground had been disturbed by many unshod hoofs and he saw, too, several arrows, some of them broken, lying, beneath the shuttered windows and in front of the closed door.

The heel of his boot thudded against the door and it crashed away from him on well-oiled hinges, smashing into a piece of furniture. His pale blue eyes raked the darkened interior, looking over the top of the leveled Spencer. Death looked back at him. The smell was worse here, both because it had been trapped inside all day and because it emanated from two bodies. He took a deep breath and stepped through the doorway, moving quickly to the windows at each side and throwing open them and their shutters. The air which flowed in was hot enough to burn the throat, but refreshing compared to that which had been confined for so long.

The room was small and ill-furnished and could have been as filthy as a pig-sty or as neat as a palace before the braves entered. Now, as the tall, lean man with the life-scarred face looked about, he saw only havoc, the result of an orgy of death and destruction. The woman was sitting on a ladder-back-chair, her ankles tied to the legs and her arms to the sides. The girl was spread-eagled on her back on the floor, arms and legs held wide by ropes fixed to nails which had been driven into the boards. The woman was fully dressed and her chin rested on her slack breasts, showing the gaping wound where a tomahawk had split her skull. The girl was naked and had no breasts, for when the braves had spent themselves on her captive body they had used their knives to satisfy a different kind of lust.

Edge went quickly toward a doorway at the rear of the room, choosing to go around the girl rather than to step over her. The door gave on to one bedroom which had been formed into two with blankets thrown over a rope strung along the ceiling. He took down two of the blankets and carried them out to the living room where he draped them over the bodies. His boots crunched on broken crockery and he had to move around overturned and smashed furniture. Then he went back into the bedroom and confirmed his first impression—there was a double bed on one side of the dividing line and two singles on the other. The Apaches had not bothered to wreck this room and from the night attire neatly laid out beneath the covers it was obvious the farmer and his wife had occupied the double bed and two girls had shared the area on the other side of the blanket partition. Edge held up first one plain white nightgown, then another, shop-bought and made of a softer, pink material trimmed with lace. They were both about the same size.

He caught a subtle fragrance from the more feminine garment and held the material against his face for a few moments, welcoming the subtleness of the perfume after the evil odor of death. Then he suddenly flung the nightgown back on the bed and strode out of the room, his
face hardening as if annoyed and, perhaps, embarrassed by his own emotions.

Outside he stood for a moment, breathing deeply, then walked quickly around the house, searching for a fourth body. But he found only a mule with its throat slashed and a dog with an arrow in its side. The dog's death had been as slow and agonizing as that of the girl in the house. He unhitched his horse and mounted; sliding the rifle back into its boot. Then, he made a wider circle of the house, noting an infrequent patch of dried blood which he guessed had been shed by Apaches hit by the white family before they had been over-run. A final circuit, outside the boundary fence, showed that only Indian ponies had left the farmstead, in a bunch and making their escape through the gateway and riding north along a just discernible trail toward a line of blue-grey hills on the horizon.

'Guess they took the other girl with them,' Edge grunted as he halted in the gateway and peered across the desolate terrain of south-east Arizona Territory.

The horse whinnied, as if in agreement and waited placidly for the wish of its rider. Edge took the makings of a cigarette from the pocket of his shirt and rolled a neat cylinder. He lit it and sat smoking, with a look of quiet contemplation, for several long moments. He was a tall man who rode ramrod stiff in the saddle, deceptively lean, for his frame was clothed in a muscular hardness that gave him a strength many men had found surprising: some had died for the simple mistake of underrating his power. In
repose, his face could be handsome, a mixture of Scandinavian blood from his mother and Mexican blood from his father combining to form features which were regular, with pale blue eyes surveying the world from a background of darkened skin-tone burnt to a deeper shade by countless hours of working and riding in the hard glare of the sun. But those who took more than a passing look at the man could see that his face was a mere mask: that beneath the rugged exterior burned a fire, kindled by pain and fed with hate, ready to flare up to dangerous proportions at the slightest breath of ill-wind.

Sitting astride his big horse, smoking the cigarette, his face in shadow from the wide brim of a low-crowned hat, Edge drew the back of a hand across the two-day growth of beard on his jaw and nodded to himself, the decision taken. It had been a hard year in Sonora, bounty-hunting the bandits in the hills and sometimes getting paid a fair price if he could find a Mexican army officer not totally corrupt. But it had served its purpose, giving the US wanted posters time to fade: the memories of lawmen north of the border to become clouded: the hurt of Jamie's death to diminish. Time, too, to realize that he could not expect to recover what was his and the life of a gunman, although it was not of his own choosing, was his destiny.
(See Edge: The Loner and Edge: Ten Thousand Dollars American.)

He tossed the smoked butt away and spat after it, scoring a direct hit on the growing red end with a soft, sizzling sound. Then he dug his heels into the flanks of the horse and started off at an even walk, going north with the afternoon sun behind and to the left of him. He raised his left hand up to the back of his neck and ran his fingertips over the smooth handle of the cut-throat razor which protruded slightly from its pouch. The thick black hair, which hung long from. beneath his hat, brushed against the back of his hand and he grinned, his eyes, shining through slits of blue and white, his thin lips curling back to display even rows of white teeth. “Figure I need a haircut, feller,” he muttered as the horse pricked up its ears. “Hope the nearest town's got a better barber than the one that called back at the farm.” The horse got nothing explicit from its rider's words and continued at its measured pace, content now that the scent of violence was left behind. Night had fallen before there was further cause for alarm.